Club Crawls Across the Globe

You might be thinking why is a company writing about other club crawls, well we like to provide our customers with all the information about our companies and some outside crawls that could provide a great experience. Our family here at vip vegas club crawl really do love to club crawl in las vegas however when we travel we are a big believer in doing a crawl in any city we visit.

Theres a few we love a few we have forgotten and a few that we will never be going to again, all of which are a great lesson to know what to do and what not to do when it comes to our own.

We'll start with Australia, the land down under has had many crawls for years and years of which some of the biggest crawls in the world happen here ever new years eve.

Goldcoast club crawl known as the hangover club crawl is a great start they take you to 4 different locations with food at the start, a FREE DRINK at each location, skip the line however what sets this crawl apart from every other crawl is its crazy party games, along the night they encourage crawlers to get up and participate in games such as 69 suck em dry, Ice cube race (this is inside a males pants), funny dancing competitions etc.

While walking between the skyscrapers and beach of gold coast you will visit clubs such as Sin city, Bedroom Nightclub, strike bowling etc all the busiest and best.

Now chances are you will be traveling around so the next would be in the top of Australia Cairns,

Welcome to backpacker heaven as cairns has grown to be one of the best locations in the winter with 30 Celsius degree weather. You can have a few beers at its many many bars, go diving on the great barrier reef, hangout at the lagoon and listen to a band or with ultimate party cairns you can travel along cairns best pub crawl on a english bus that has been changed to a nightclub on wheels.

This party has actually been noted in many travel magazines as one of the best parties they would be right as the food before the crawl is a massive bbq then they load you up and take you to the best venues in cairns.

Now sydney is of course going to be the big one, with millions of visitors a years you would expect this.

sydney pubcrawl will not disappoint with one of the biggest party thrown every St Patricks day event going into the hundreds to thousands for a singular event.

Drunkenly stroll through the streets of sydney while walking with others into the hottest and dingiest bars available a nice mix that really builds the night up.

Their Pub Crawl offers you an exciting crawl through 3+ of the biggest and most known pubs, lounges and club in Vienna, 7 free drinks, many games and challenges and the most important - tons of new friendly folks that will make your night A NIGHT FULL OF MEMORIES. Click here for details.

Make the most of Brussels Nightlife! Join us and have a hell of a night. Click here for details.

Lets head over to London, with London party club crawl this crawl has over 500 trip advisor reviews that are almost all 5 star you can't really go bad with a rating like that. They have 3 crawls 1) London 2) Shoreditch 3) Camden.

Another great London option: The 1 Big Night Out pub crawl is a daily guided bar tour. Bringing together students and tourists in London every night to get drinks discounts, free stuff, club entry and good times

They have been partying and pub crawling the streets of London longer than they can remember, so they have the lowdown on all the best venues from party clubs like Zoo Bar and Piccadilly Institute, your hardcore dance halls like Ministry of Sound, Fabric and Cargo to the cool hangouts like Proud Galleries, so a night out with us will mean you do not need to know the secret handshakes or grease the palms of doormen with cash to get access to the best London has to offer, all you need is the 1 Big Night Out crew.

Whether you are looking for a wild night in Central London, an underground pub crawl in Shoreditch or you want to rock out with a pub crawl in Camden... Visit www.1BigNightOut.com

SPAIN: Get to know the coolest cities in Spain with professionals in the best activities, they have everything you need, from walking tours, gastronomy to the best party in town! Find them in Madrid, Seville, San Sebastian and Barcelona. Click HERE to learn more!

Now back in our own country Los Angeles is the city of angels however we have found when it comes to night life they are hard to find so to help you navigate theres a Hollywood club crawl ran by LA Epic club crawls who also runs a los angeles club crawl in down town LA. Along the night they go to the hottest clubs in town which are extremely exclusive with a feed and drinks for the Hollywood crawl. They're rated number 1 on trip advisor for nightlife and have crawls all around the country of which are the highest rated in the world.

This group also takes our pick for our pick of the best new york club crawl which is open during the summer months and private tours during the winter, checkout their meat packing district tour or east village pub crawl.

However they do work closely with vip vegas club crawl in Las Vegas, LA Epic las vegas takes out a whooping 30,000 plus people a year around to the hottest clubs such as Omnia, Drais, Hakkasan, Tao, 1 Oak and many more famous clubs it sure is one of the best las vegas club crawl

While we are on the subject of Vegas we also love universal club tour and bachelorette parties as they can organize any activity in las vegas you would like to do.

Our list is ever growing and we want your input what else would you include?

What is a Las Vegas Pool Crawl?

Club Crawls Across the Globe

5 of the Best Mega Clubs in Las Vegas

Trick or treat yo’ self to an epic night with us, this Halloween 2020 in Las Vegas!

Things to do in Vegas for NYE

What is a Las Vegas Pool Crawl? 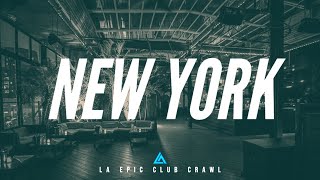